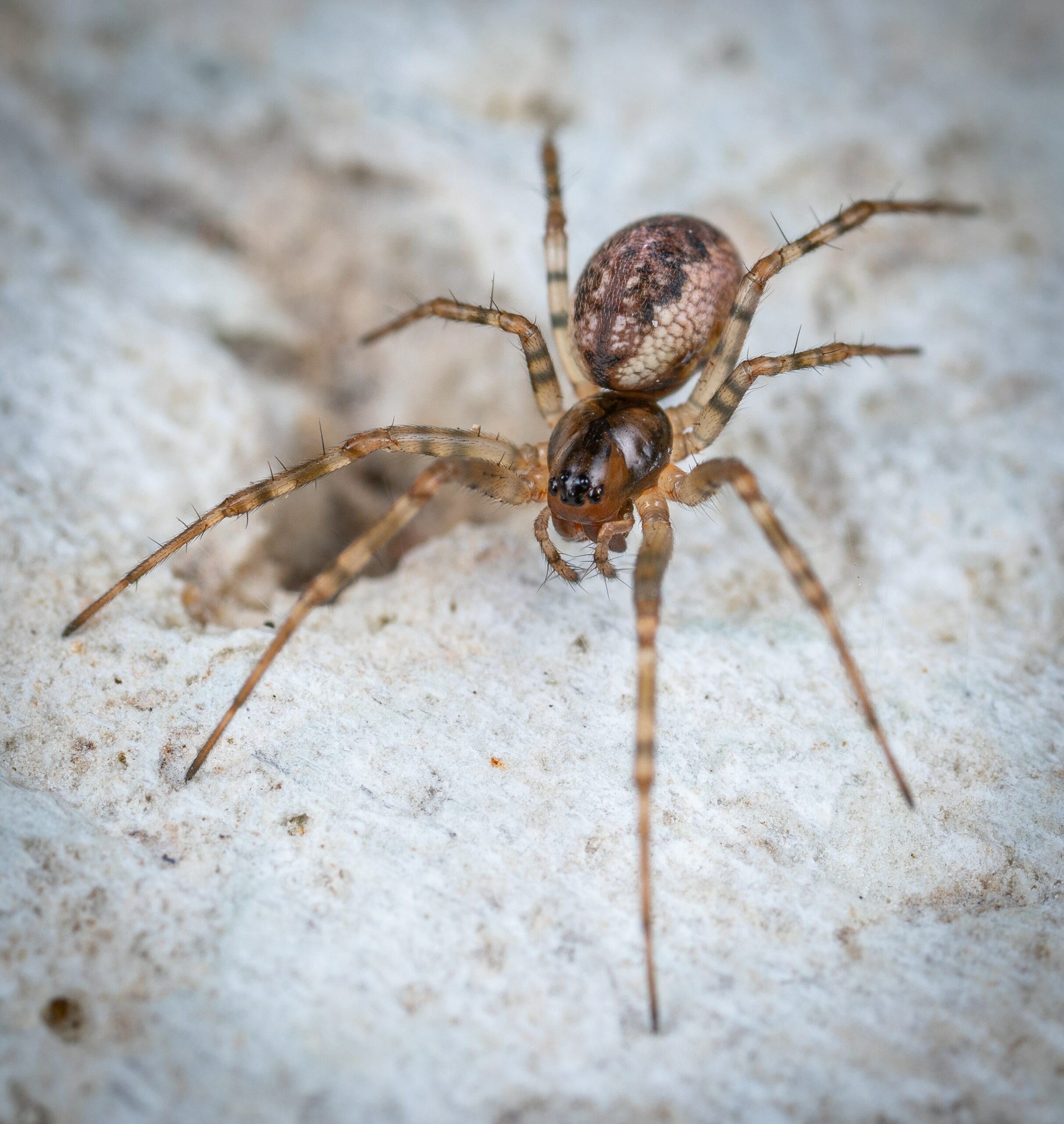 Reportedly, only about 3-15% of the United States population has arachnophobia– but it does seem like fear of spiders is much more common than that.

Fear of spiders might be a biological thing; it’s theorized that we’ve evolved with a developed fear of things like snakes and spiders. Some level of caution around these creatures is probably good, since they can both potentially cause harm.

Spiders do play a very important role in our local ecosystems here in Arkansas– they eat other insects that can potentially become problematic within our homes and communities. However, some spiders do bite, which can be dangerous for humans.

Brown recluse spiders are dark brown spiders with a large abdomen and long legs. True to their name, they are indeed reclusive and will run and hide if they spot you. If you’re able to get up close, you might notice a violin-shaped marking on the thorax, which could help you definitively identify a brown recluse.

What do brown recluse spiders eat?

The brown recluse spider specifically eats insects like cockroaches, moths, and flies, which are all critters you don’t really want in your home! These dietary habits make brown recluses pretty helpful to have around– but the catch is that they kill their prey by way of their necrotic venom, and they can bite humans, too.

If you’re not sure what necrotic venom is, it just means venom that causes damage to the cells and tissues of the unfortunate recipient of the spider’s venomous bite.

Of course, these bites are fatal for spiders’ typical prey, like flies, moths, and roaches. For humans, they are very rarely fatal… although “very rarely” doesn’t mean “never”, which might not be very reassuring.

Typically, brown recluse bites can heal on their own without any treatment. It’s important to keep a close eye on a spider bite, though, since infection is a serious risk that can have major consequences if left untreated.

Generally, it’s a good idea to have a doctor take a look at a spider bite– they’ll suggest the proper course of treatment, and will be able to intervene if it’s not healing the way it should. Even if you don’t see a doctor right away, definitely wash the bite thoroughly with soap and water as soon as you notice it.

While these bites are a possibility, brown recluse spiders in Arkansas aren’t on the hunt for humans. Like we mentioned above, they’re much more likely to run away from you, and are most likely more scared of you than you are of them.

Their reclusive habits mean that they like to hide in areas that are typically left undisturbed in the home. These might include closets and attics, and they might even hide in shoes and clothes that haven’t been used in a while. Spider bites usually occur when a human suddenly comes into close contact with a spider’s hiding spot; they will only bite a human when they feel threatened.

In short, brown recluse spiders are not out to cause you any harm– but it’s still possible that they might. Use caution when going through unused clothing, closets, attics, and crawl spaces to avoid potential bites.

What should I do if I see brown recluse spiders in my home?

Seeing brown recluse spiders and webs often in your home means that you’re most likely dealing with an infestation.

Even if you’re not aware of any insects present in your home that these spiders might be attracted to, the spiders are there to hunt– and if you see them, it means they’ve been finding some good meals in your house! They might be finding silverfish, roaches, beetles, or other insects hiding in crawl spaces or other parts of your home that are sheltered from cold weather.

First, if you have brown recluse spiders in Arkansas, exercise caution in your home. This includes shaking out clothing that’s been unused for a while, tapping your shoes upside down before putting them on, and keeping an eye out for spiders in cluttered or unused spaces in your home.

You should also contact a professional pest control service. Children, the elderly, and people with existing medical conditions can have the most severe reactions to brown recluse bites, and it’s best to eradicate the problem in order to keep you and your family safe.

Give Hopper Environmental Services a call today to make an appointment!