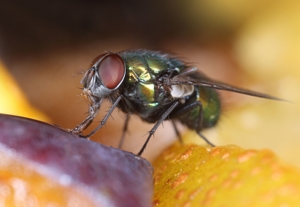 Identifying the Flies in Your Home

Flies are among the most common types of pests in the United States and around the globe. There are over 120,000 species found across the planet, 18,000 of which are present in North America. While these insects have fairly short lifespans, they are also some of the most frustrating pests to deal with, as they reproduce quickly, have large numbers of offspring, and can spread a range of serious diseases such as malaria, salmonella, and tuberculosis. They can also make their way into your home through virtually any small opening, from cracks in your weather stripping to holes in screen doors. And they flock to any kind of rotting organic material, from garbage cans to compost piles, where it is common for females to lay between 75-100 eggs, which combined are no bigger the size of a pea.

Given their ubiquitous nature, the dangers they pose to your household, and their ability to travel fast (flies have been known to go 20 miles outside of their birthplace in search of food,) these insects can be extremely difficult to get rid of. Fortunately, our residential pest control pros at Hopper Termite & Pest Control are fly experts, and are here with all the helpful tips you need for identifying the flies in your home. Keep reading for all the information on common household flies that you need, and remember, when it comes to fast extermination and treatment, you can always count on Hopper Termite & Pest.

Different Types of Flies & The Threats They Pose to Your Home

Depending on conditions, a housefly can grow from an egg to a full-grown adult in about six days. It is common to find eggs in a variety of nasty places, such as on feces, near rotted food, or in the trash can. While female houseflies usually only mate once, they are capable of producing between 350 and 900 eggs in their lifetime. They do not have teeth and are not stinging insects, instead feeding on liquids, using their spongey mouthparts to actually liquify solid foods. Their favorite foods include everything from human leftovers to garbage to animal waste.

To reiterate, houseflies do not bite, though they are capable of carrying more than 100 pathogens that can be transferred to humans. These include diseases such as salmonellosis, typhoid, and tuberculosis. As a result, a housefly merely landing on a food surface can contaminate it, as they pick up biological organisms and spread disease through both their mouths and legs. They also defecate wherever they land, which in turn spreads more bacteria. This is why even one fly can represent a cleanliness issue for your household—and a lot may merit professional extermination.

As their name suggests, fruit flies are naturally attracted to rotting food matter, and are particularly keen on fruit and vegetables. They also love any kind of fermented or fermenting liquids, such as beer, wine, and liquor. These insects like to hang out and breed in the dark, and are often found in dank, dirty environments like drains, garbage disposals, and trash cans. Like other fly species, they have a four-stage life cycle, which may be finished in a week, depending on various conditions.

In addition to being huge nuisances, fruit flies can also contaminate your food with a number of bacteria and pathogens. Much like houseflies, they thrive in unsanitary conditions, so it is extremely important to keep your home tidy if you want to keep them away—and especially to throw away any fruit ASAP when it starts to rot.

One of the hallmarks of the adult horsefly is that it is extremely fast, with the ability to travel more than 30 miles outside of their birth site (though this does not happen often.) Unlike fruit flies, they are attracted to light, and often gather around windows. However, you may also see them in open wooded paths, where they will wait for potential hosts. It is extremely common to see them on windless, sunny days, especially if you are near wet soil or a body of water. Of the most common American flies, they also have the longest lifespan, surviving anywhere from 30-60 days depending on conditions.

While horseflies are not known for being vectors of disease or spreaders of bacteria (at least not in humans,) females do bite, as their mouthparts are used to suck up blood for sustenance. They are also exceptionally persistent, and will continue to attack a host until they are fed or killed. Some females horseflies will even chase their targets, following them from one location to the next. And while their bites generally aren’t harmful to humans, they cause painful allergic reactions, so it is important to get them exterminated ASAP for the sake of yourself and your animals.

To keep flies away on your own, the best course of action is always to practice proper sanitation. As you would to keep away mosquitoes or roaches, pick up/take out trash vigilantly, clean and wipe down surfaces on a regular basis, and limit excess moisture inside and outside your house as much as possible. You should also try to seal up cracks and holes in your home where you can, and if you have a pet, always stay on top of their waste and food needs.

At Hopper Termite & Pest, we know firsthand what a nightmare it can be to deal with a fly infestation, and we are here to help you get rid of flies and keep them away for good. From thorough inspections to determine the origin of your infestation, to cutting-edge trapping using methods like ultraviolet lights, to exclusion designed to reduce factors that attract flies to your property in the first place, we know how to make sure these nasty pests are no longer part of your daily existence. Call today for more information about fly species, and do not hesitate to ask us for a free estimate!